The proliferation of 24 hour news channels has led to a ridiculous amount of expert(?) discussions on eternally debatable topics to fill up airtime.  It’s a fantastic business model, but a breeding ground for oversimplified surface theories with no true roots in reality.  Nowhere is this more abused than in the world of sports and the current debate on a potential tarnished legacy for Peyton Manning if he fails to win another Super Bowl.

Somehow, in our culture, winning has become the only thing that matters, the ultimate measuring stick to rank an athlete’s level of greatness compared to his, or her, competitors.  Okay to do in individual sports, but shortsighted in team sports filled with numerous variables impacting the final outcome.

One of the greatest basketball players and “clutch” performers, Michael Jordan, has missed the game winning shot twenty six times and lost.  He’s got six rings.  But he also had Scottie Pippen, Horace Grant, Dennis Rodman, and Phil Jackson.  LeBron’s got DWade, Chris Bosh, and Ray Allen.  Joe Montana had Rice, Taylor, Craig, Haley, and Lott.  Joe Cool was also the recipient of good fortune at the stone hands of Bengals cornerback Lewis Billups dropping a Super Bowl winning interception.  If the Spurs make a few free throws or grab a rebound, LeBron and Company don’t repeat.  Championships aren’t decided by one player’s actions on one play, but a series of plays by teammates and opponents as well.

All were great TEAMS.  Something Peyton Manning has never been on.  He’s been the reason his subpar teams were even in the hunt.  And he still has managed to win a Super Bowl.

Mark Rypien.  Trent Dilfer.  Brad Johnson.  1 Super Bowl win each.  Dan Marino.  Fran Tarkenton.  Dan Fouts.  Warren Moon.  Jim Kelly.  Zero championships.  Does this make Rypien, Dilfer, and Johnson better than Marino, Tarkenton, Fouts, Moon, or Kelly?  Hell no.  Eli Manning’s got two, and 2 SB MVPs because they didn’t want to single out anyone on the Giants stellar defense.  Better than his brother?  Hell no.  Better than Marino, Tarkenton, Fouts, Moon, or Kelly?  No way.  The New York Giants defense beat the New England Patriots twice.  Make Eli go against his own defense and he doesn’t even sniff a Super Bowl.  Give Peyton Manning a defense and he’d have a handful of championships.

I hope Peyton wins another championship.  He deserves it.  If for nothing else, to shut up the experts… let’s call them critics because no football expert would ever question his greatness.  Whatever happens the rest of this season, and his career, he is one of the best quarterbacks to ever play the game.  I’d also like to thank him for quarterbacking my fantasy team this year.

Seems like the ex(perts)… I mean critics… didn’t think bottoms UP had much of a shot. 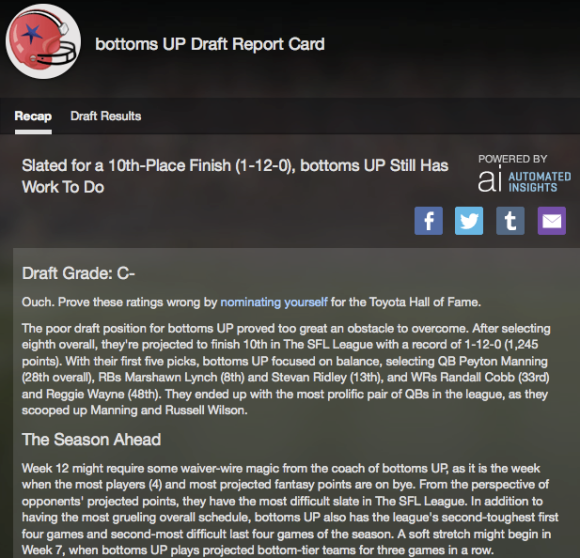 But Peyton lead us to a decent regular season… 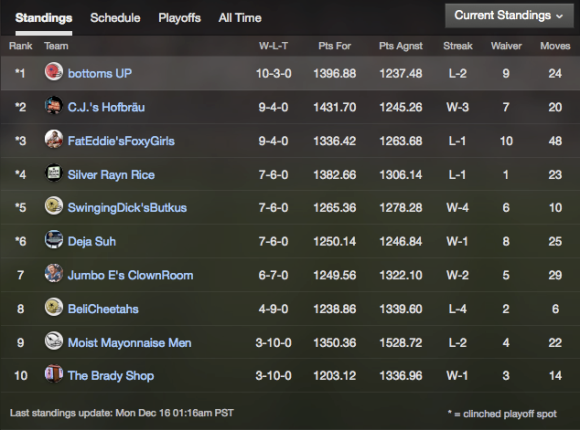 So from me and Peyton — since he’s way too classy to say it in a public forum — we cordially invite the experts — I mean critics — to, “Suck it!”